Rensa (A Certain Magical Index) is able to mimic any ESPER ability within 200 meters, but they are weakened due to the required computational abilities.

The user can create a field or area where they can copy all powers inside the field.

Using his Empathic Mimicry, Peter Petrelli (Heroes) could mimic the powers of other evolved humans within proximity, such as his brother Nathan's Flight... 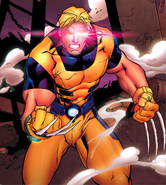 ...and uses it to defeat Onaga.
Add a photo to this gallery
Retrieved from "https://powerlisting.fandom.com/wiki/Power_Replication_Field?oldid=1506712"
Community content is available under CC-BY-SA unless otherwise noted.