The power to share a power with a person or group of the user's selection. Sub-power of Superpower Manipulation and Power Bestowal.

The user can share their powers with others or vice versa to become more powerful or access a power that is otherwise not of their own. The user might also take their powers back when ever they choose to.

Shadowhunters and Downworlders (The Mortal Instruments) can share each other's powers via a Binding rune.

Eric Gibb (The Boy Who Could Fly) is able to fly and can extend this power to others, as long as he holds their hand. 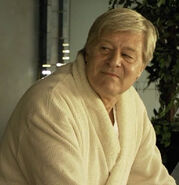 When Voldemort's (Harry Potter) body was destroyed during his attempt to kill Harry, part of his soul attached itself into the boy's scar. As a result, Harry became a Horcrux and shares the Dark Lord's ability to speak Parseltongue.

Akane Sakurada (Castle Town Dandelion) can share her Gravity Core power with others.

Lie Ren (RWBY) extending the effects of his Semblance to Nora Valkyrie through physical contact.

The Flash (DC Comics) can lend speed to others.

Vortex (Danny Phantom) can, unconsciously, share his power with any other ghost when he uses his electric attacks, like he did with Danny.

Undergrowth (Danny Phantom) shared his plant powers with Sam.
Add a photo to this gallery
Retrieved from "https://powerlisting.fandom.com/wiki/Power_Sharing?oldid=1691410"
Community content is available under CC-BY-SA unless otherwise noted.