The unborn Wyatt Halliwell (Charmed) swaps the powers of his parents to give them a feel of how tough each other has it.

The power to exchange powers between individuals. Sub-power of Superpower Manipulation.

The user can transfer powers between themselves and others. The user stores powers within themselves, along with Power Transferal, and can swap them with others at later times.

The true nature of "Auswählen" (Bleach) is to allow Yhwach to redistribute power, taking it from any Quincy deemed useless and giving it to those who need it.

Using his DNA Manipulation, Matthew Kim (The Flash) can transfer powers between other beings...

From Matthew Kim, DeVoe (Arrowverse) can manipulate the metahuman DNA markers of individuals, allowing him to siphon and transfer the powers of one person to another host, even into himself. 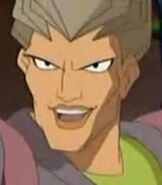 Drake Sypher (Loonatics Unleashed)
Add a photo to this gallery
Retrieved from "https://powerlisting.fandom.com/wiki/Power_Transferal?oldid=1696168"
Community content is available under CC-BY-SA unless otherwise noted.