When holding hands the Strucker siblings (The Gifted) become single collective entity that can use the Fenris Force by combining Andy's power to push things apart and Lauren's power to pull them together.

The capabilities of this power differ between users. The core concept is the users have powers that are designed to only work at full power and potential when they are with the other person or thing. This may be formed by a pact of sorts or an emotional/biological/spiritual connection.

Lucifer and Michael (Vertigo Comics/DC Comics) each have limitations they overcome when working together, by working together they are at their full strength and can create entire multiverses, which resulted in the creation of the DC multiverse.

Ino, Shikamaru, and Choji (Naruto) are inseparable due to family alliances, a three-man squad since the beginning and close friendship, they have different formations and techniques that feed off of and work well each other.

Inuzuka Clan (Naruto) combine their strengths and techniques with their canine partner. 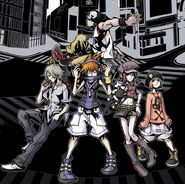 Players (The World Ends With You) must form a pact in order to survive the Reapers Game. This pact synchronizes the energies with their partner to become a massive unison power.

Using Chase's Override App and standing in a perfect triangle, the Lab Rats can create a large fuse attack that can take out Krane.

The Thunder Twins, Max and Phoebe (The Thundermans) activate their twin power by holding hands, which will create sparks, launching an energy blast.
Add a photo to this gallery
Retrieved from "https://powerlisting.fandom.com/wiki/Power_Union?oldid=1523689"
Community content is available under CC-BY-SA unless otherwise noted.