Kratos (God of War) wields his godly powers by channeling them into the Blade of Olympus.

The power to create or use weapons capable of powers. Variation of Powers Via Weapon.

The user can use various types of weapons, such as blades, polearms, and whips, capable of having individual superpowers including elements, psionics, magic, spirits, divine or demonic energy, etc.

Augus (Asura's Wrath) can use his sword, Wailing Dark as a conduit for his Mantra attacks.

Willow Rosenberg (Buffy the Vampire Slayer) uses the Slayer Scythe as a conduit to cast a spell.

Hei (Darker than Black) often uses his knives as conduits to discharge electricity.

Gambit (Marvel Comics) can use simple playing cards as conduits for his kinetic powers.

Silver Samurai (Marvel Comics) using his sword as a conduit for his tachyon energy field. 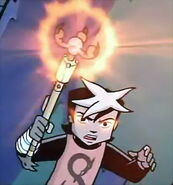 Zak Saturday (The Secret Saturdays) using the Claw as a conduit to focus his cryptid powers.