Ann Marie LeBeau/Rogue (Marvel Comics) can absorb the powers, energies, memories, knowledge, talents, personality and physical abilities (whether superhuman or not) of another human being (or members of some sentient alien races) abilities by touching them.

The ability to have a supernatural touch that can induce a variety of effects. Variation of Supernatural Bodily Aspects.

The user has a supernatural touch that can affect objects, bodies, structures, etc. in varying degrees. This can happen by any contact between the user's body and their target, but most predominantly from hand contact and from kisses. It is even possible affect non-physical things, such as touching someone's body to read their mind, absorb their memories, powers, or life-force.

This is commonly used by hand contact to transform objects, affect others bodies, absorb their power, heal them, or even kill them. 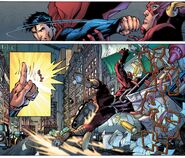 Silver Fox (X-Men Origins: Wolverine ), can manipulate those that she touches.

Jeremy Greer (Heroes) can heal the wounds of whoever he touches. 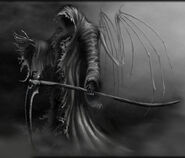 The Grim Reaper (Mythology) has the touch of death.

An Angel (Christianity) touch can range from...

...healing and resurrecting the dead...

...to smiting the sinful.

Grand Elder Guru (Dragon Ball Z) can unlock the true powers within anyone.

Toguro (Yu Yu Hakusho) using his monstrous strength to pop off Butajiri's head simply by tapping it with his finger.

After merging a piece of Transmode virus into himself, Eliphas/Eli Bard (Marvel Comics) gained power over a T-O infection that could raise and empower the dead to serve him.
Add a photo to this gallery
Retrieved from "https://powerlisting.fandom.com/wiki/Powerful_Touch?oldid=1747204"
Community content is available under CC-BY-SA unless otherwise noted.