Like other Soul Reapers/Shinigami, Ichigo Kurosaki (Bleach) gains the majority of his power through his Zanpakuto, Zangetsu .

Use powers through weapons.
The power to use powers through the use of weapons. Sub-power of Weapon Manipulation and Weapon Proficiency. Variation of Powers Via Object. Not to be confused with Power Weaponry.

The user has access to a weapon that grants them supernatural powers, these can be magical objects of great or destructive power or technological weaponry. If the user already possesses supernatural abilities, the weapons are mostly meant for letting them access and/or enhance their powers or grant them new abilities.

Akame (Akame Ga Kill!) can kill in one cut via her One Cut Killer: Murasame blade.

Kurome (Akame Ga Kill!) can control eight corpses via her March of the Dead: Yatsufusa blade.

The Sword of Damocles (Assassin's Creed), one of the Swords of Eden.

Creed Diskenth (Black Cat) can only use his Imagine Blade via a sword hilt.

Durham Glaster (Black Cat) can only use his Shot via a gun muzzle.

Nami (One Piece) wielding the Clima Tact, a staff that allows her to manipulate and generate powerful weather effects for a varity uses.

Leo (One Piece) can only use his Nui Nui no Chikara via needles.

With his Meido Tessaiga, Inuyasha (Inuyasha) can slice through dimensions. 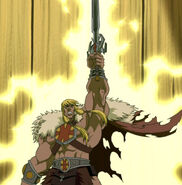 King Grayskull (He-Man and the Masters of the Universe) was the original wielder of the Sword of Grayskull which empowered him with its cosmic energies.

Prince Adam (He-Man and the Masters of the Universe) becomes the invincible He-Man only when empowered by the Sword of Grayskull.

The Monado (Xenoblade Chronicles)
Add a photo to this gallery
Retrieved from "https://powerlisting.fandom.com/wiki/Powers_Via_Weapon?oldid=1523398"
Community content is available under CC-BY-SA unless otherwise noted.