Angela Petrelli (Heroes) dreams of Sylar, dressed and acting like Nathan Petrelli, before it actually happened.

"I had...a dream...I saw the two of you...cutting down heroic figures on a field of scarlet red, slaughtering your enemies drove after drove."
― Rin Shou Jo to his vassals, Gyou'un and Chou Ga Ryuu (Kingdom)

e power to perceive future events while in a dream state. Sub-power of Oneiromancy. Variation of Precognition. Opposite to Retrocognitive Dreaming.

The user is capable of perceiving future events in dreams.

Sandy Hawkins (DC) was granted this power by his mentor Wesley Dodds.

Roxie Torcoletti (Eastwick) is able to dream the future or had interpretations of this one.

Buffy Summers (Buffy the Vampire Slayer) having a prophetic dream.

Soren (Guardians of Ga'Hoole) possesses an ability known as "Starsight", allowing him to witness events that have yet to come in his dreams.

As a witch and seer, Morgana Pendragon (Merlin) was able to see visions of the future in her dreams, her prophetic nightmares initially largely revolving around Arthur Pendragon's death.
Add a photo to this gallery 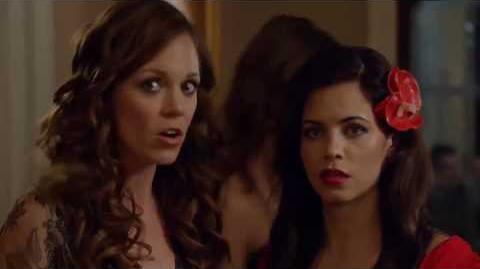 Freya Beauchamp Magical Powers Part 2-1
Add a photo to this gallery
Retrieved from "https://powerlisting.fandom.com/wiki/Precognitive_Dreaming?oldid=1514205"
Community content is available under CC-BY-SA unless otherwise noted.