With his impressive wits, Joseph Joestar's (JoJo's Bizarre Adventure) favorite strategy since his youth is predicting what his enemies will say next.

"What I hate most about talking to you jerks is that I always know what you're going to say. Partly because I exist in six directions in time at once, but also you are all stupid."
― Sarda (8-Bit Theater)

The user can perceive future and/or recite/prophesy it aloud, they may be aware of the process and able to control it, or it may be completely involuntary and/or be uttered in trance. 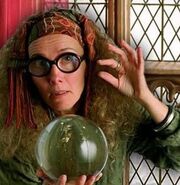 Charlotte Katakuri's (One Piece) Kenbunshoku/Observation Haki predicts what anyone will say next.