Possess a tail that can be used as an extra limb

The power to have a tail that can be used as an extra limb. Variation of Natural Weaponry and Tail Manifestation 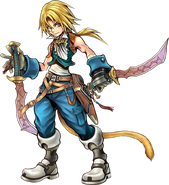