Stribog (Slavic Mythology) is the ancient primordial god of the air and wind.

User can create, shape and manipulate air of an ancient primordial nature. As opposed to regular Air Manipulation, users of this power are deities, avatars, or living embodiment of air. As such, they can cause natural air effects such as tornadoes, hurricanes, and wind storms to manifest. In many cases users of this power will be able to override other forms of Air Manipulation as air is the domain of the user.

Shu (Egyptian Mythology) is the primordial god of the air and light.

Amun (Egyptian Mythology) was known as one of the eariler gods who mastered the powers of air. 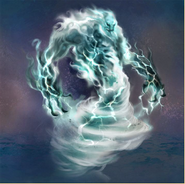 Aether (Greek Mythology) was known as the primordial greek god of the upper air and light.

Farore (The Legend of Zelda series) is one of the three Golden Goddesses, with Farore governing over the forests, life and air.

Rayquaza and its Mega form are part of the ancient Weather Trio, with Rayquaza governing the winds and skies.
Add a photo to this gallery
Retrieved from "https://powerlisting.fandom.com/wiki/Primordial_Air_Manipulation?oldid=1360240"
Community content is available under CC-BY-SA unless otherwise noted.