"We who sleep in the sun are the nuclear mother of all Parliaments. Older than air, older than water, older than the earth itself. We gave birth to the worlds below four and a half billion years ago. But only now has our brightest child reached maturity and returned to visit us. Authority over all flame has been waiting for you Holland-Mind. Use these ancient fires now to purge the last trace of humanity from your soul."
― Parliament of Flames (DC Comics)

The user can create, shape and manipulate fire of an ancient primordial nature. As opposed to regular Fire Manipulation, these flames are indistinguishable and absolute. As such, they can cause natural and supernatural fire effects such as Crown Wildfires, Firestorms, Solar Flares, Hypernovas and Heatwaves to manifest, also can manipulate flames that possess heat that go beyond Planck Level and defy the very laws of Hyper-Thermodynamics. It allows a user to burn anything, even non-flammable, incorporeal, or conceptual things like time and nonexistence. They also have the ability to manipulate the underlying foundation of the concept of fire and concepts associated with it . Fire Immunity and/or Heat Immunity provides no protection from these flames as they will be completely bypassed due to its sheer potency and primeval nature. In many cases users of this power will be able to override any other forms of Fire Manipulation as fire is the domain of the user.

The Flame of Prometheus (Once Upon a Time) was a part of the first fire that Prometheus gave to man, its fire the only kind of flame that could meld the metal of the Holy Grail.
Cu Chulainn H.png
Cu Chulainn (Valkyrie Crusade) the incalculably powerful goddess of fire. 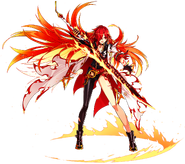 As Flame Lord, Elesis (Elsword) becomes the incarnation of fire itself, allowing her to control even primordial flames.
Community content is available under CC-BY-SA unless otherwise noted.