Kronika (Mortal Kombat), a Titan, wields metaphysical abilities thanks to her primordial dominion over space and time.

Have your primordial force link to your powers.

The ability to have one's primordial force linked to one's powers. Variation of Self Power Link. Opposite to Apocalyptic Power Link.

The user can make their primordial force connect to their powers and use it to control them. The primeval energy fuels the powers and allows them to be strengthened and utilized on various levels.

Goddess of Dawn (Invaders of the Rokujouma) 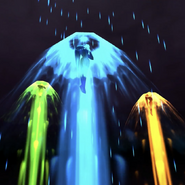 Golden Goddesses (The Legend of Zelda)

Elders of the Universe (Marvel Comics)

Darkness/Hosts (Top Cow Comics)
Add a photo to this gallery
Retrieved from "https://powerlisting.fandom.com/wiki/Primordial_Power_Link?oldid=1521336"
Community content is available under CC-BY-SA unless otherwise noted.