Vatenkeist (Tales of Eternia) is the immaterial reality that existed before the creation of the universe, and which was ruled by the primordial goddess Nereid.

Manipulate the reality before reality.

The power to manipulate the state of pre-reality. Sub-power of Alpha Reality. Variation of Reality Warping.

User can create, shape, and manipulate the primordial reality, the reality before reality or before the concept of reality. This allows them to control the original reality and blueprint/template/drawing board for what reality would become after the creation of existence, including the principles, concepts, laws and forces that would later come to define existence.

Since this is a form of reality that both transcends and came before time, the same laws/rules that govern existence may not/do not apply to users of this as nothing was properly defined yet.

User of this can overpower and even surpass both normal and even advanced reality warpers, as they have access to things that haven't existed since before existence and even undo any/all changes warpers make by using the original blueprint of reality to fix things.

The Obryiths (Planescape) have constantly and continually warped, collapsed and destroyed realities and universes that somehow existed long before the creation of existence. 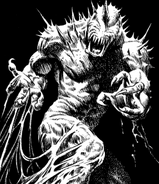 The Shadevari (Forgotten Realms) are timeless, primordial beings that controlled the shadowy, pre-reality state of the multiverse long before the gods came into being.
Add a photo to this gallery
Retrieved from "https://powerlisting.fandom.com/wiki/Primordial_Reality_Manipulation?oldid=1401806"
Community content is available under CC-BY-SA unless otherwise noted.