Santiago (Heroes) using his ability to see the probable outcomes of his possible paths of play.

Perceive the probability of anything.

The power to perceive the probability of anything. Sub-power of Probability Manipulation. Variation of Precognition and Parachronal Cognition. Lesser variation of Causality Perception.

Users can perceive the information of any situation and use the variables of that information to predict/perceive the paths that lead to certain outcomes, based on what choices are made. They can then accelerate themselves along the path of their desire, which causes them to reach the conclusion of the path taken. Users can use this ability to accurately predict/perceive not just one future, but multiple different likely futures.

Marcus Ayers (Alphas) can predict and control the cause and effect of any event. 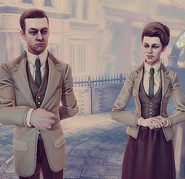 After Comstock destroyed the machine they used to create tears, Robert and Rosalind Lutece (Bioshock Infinite) became beings who can not only exist in nearly every universe, but know the outcomes of all of those universes, turning it into a game among themselves.

Garnet (Steven Universe) has the power of 'future-vision', granting her the ability to see nearly every possible outcome in a given situation, and can even grant it to Steven temporarily...

...an ability she inherited from Sapphire.

With his Ultimate Eye, King Bradley (Fullmetal Alchemist) could see and predict the outcome of events...

...demonstrating as he uses it for combat.

The Star-Dancer's (Marvel Comics) "stellar matrix-sense", an extrasensory perception of flux in the probability fields that surround her, allow her to anticipate critical factors that may affect her life.

Archer's (Fate/Stay Night) Combat Logic allows for calm analysis of the situation and the enemy's ability in spite of danger, and consideration of all possible actions in a particular situation. If there is even a 1% chance of comeback, this ability greatly improves the chances of success.

On top of being an adept killing machine, Luther Strode (The Strange Talent of Luther Strode) is able to view several moves ahead of a targets next maneuverings just by viewing and observing both his opponents and their surroundings.

Midnighter's (Wildstorm) mental battle computer enables him to see and predict every possible outcome of a fight before it starts...

...and to map out a path to the scenario he desires.
Português do Brasil
Community content is available under CC-BY-SA unless otherwise noted.
Advertisement