Users can cause planets to form in minutes instead of millions of years.

Manipulate the speed of processes.

The ability to manipulate the speed of processes.

The user can manipulate the speed of any process, manipulating how fast/slow something acts/works, make things done faster without even the slightest delay or slow down. They can also slow processes down. This does not affect the flow of time itself, just whatever is involved with the project as a whole, from machines to people and so on. 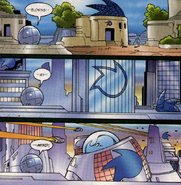 The planet Azuria (Archie's Sonic the Hedgehog) exists at an accelerated rate in the time stream, allowing the inhabitants to construct anything from simple villages to modern cities, and advance their civilization, in mere minutes.

Once implanted, the Ghost ÄRM, Rondo of Time (Marchen Awakens Romance) accelerates all time-related processes of its host.
Add a photo to this gallery
Retrieved from "https://powerlisting.fandom.com/wiki/Process_Speed_Manipulation?oldid=1506875"
Community content is available under CC-BY-SA unless otherwise noted.