Use the traits of computer program.

The power to use the abilities of computer program. Technique of Programming.

User with this ability either is or can transform into living computer program. Users' transformed form can be anatomically identical to their normal form, aside of being made of computer program, in which case it contains all to organs and is somewhat vulnerable to attacks. Alternately user can transform into homogeneous matter, without any part of their form being more important than the other.

CLU (Tron) was a hacker program written by Kevin Flynn.

Sark (Tron) was a program that served the MCP.

The Master Control Program (Tron) is a rogue computer program, created by Walter Gibbs and vastly improved by Ed Dillinger, that ruled over the world inside ENCOM's mainframe computer system.

CLU 2 (Tron: Legacy) was a program created by Kevin Flynn to run the Grid.

Quorra (Tron: Legacy) is an ISO, a race of programs that naturally evolved on the Grid as opposed to being created. 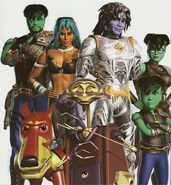 Key Tools (Reboot) are semi-sentient, wrist-mounted tools handled by Guardians, equipped with various gadgets and functions for many situations from mending tears to creating portals across the net, downloading game information and so on.

The D-Reaper (Digimon Tamers) was a simple janitorial program that assimilated the evolutionary capabilities from Digimon Data, becoming a destructive, viral force that threatened to destroy both the Digital and the Real world.

The Architect (The Matrix) is a highly-specialized program who was created to properly design the Matrix.

The Oracle (The Matrix) is a program who's job is to analyze the human psyche and apply it into the design of the Matrix and the other programs that run it, giving them their more human-characteristics. 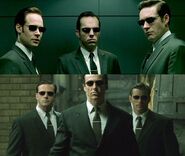 Agents (The Matrix) are a special breed of security program who is tasked with keeping the Matrix a secret from its human inhabitants and eradicate anyone who threatens this.

Agent Smith (The Matrix) was an Agent who - after copying a part of Neo's coding - becomes a nigh-unstoppable computer virus that destroys the Matrix.

The Red Queen (Resident Evil) is a computer program made by the Umbrella Corporation to run security and to prevent an outbreak.

X.A.N.A. (Code Lyoko) is a living and dangerous virus-like computer program that inhabits in the Supercomputer that controls the virtual world of Lyoko.

Nicole the Holo-Lynx (Sonic SatAM/Archie's Sonic the Hedgehog)
Add a photo to this gallery
Retrieved from "https://powerlisting.fandom.com/wiki/Program_Physiology?oldid=1397544"
Community content is available under CC-BY-SA unless otherwise noted.