By setting a program for Melchsee's Door to make it smaller, Ageha Yoshina (Psyren) creates an instantaneous beam with a homing effect of 30 meters that's capable of penetrating and cutting through almost anything.

The ability to program your powers to act a specific way in and out of combat.

The user can instruct (program) their power to do a certain task; their power does it when certain conditions have been met.

Programs can be made for purposes such as launching a variety of attack patterns and movements that cause confusion on the battlefield. An example of a defense program is a set of instructions for creating an automatic deflection shield.

The user can also create programs for mundane things, such as programming Telekinesis to clean dishes when they are preoccupied with another task, or programming Fire Generation to start a fire inside a grill whenever they open its lid.

As she progressed through her Telekinesis training, Marie Tenjuin (Psyren) began programming the actions into her head, since it's easier for her. With this she is capable of doing things at the same time such as washing, drying, and stacking dishes.

Accelerator's (A Certain Scientific Accelerator) ability "Redirection" is a field that automatically reverses all kinetic vectors and displaced position vectors. 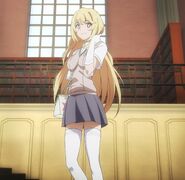 Shokuhou Misaki (A Certain Scientific Railgun) programmed the activation of her powers to specific remotes she carries around.

Aimaru (Toriko) demonstrating his Routine to Toriko.
Add a photo to this gallery
Retrieved from "https://powerlisting.fandom.com/wiki/Programmable_Powers?oldid=1743834"
Community content is available under CC-BY-SA unless otherwise noted.