"I am killing you, Stranger, one brain cell at a time! Do you feel them exploding in your head like...What is that Earthly foodstuff...Popcorn?!? "
― The Overmind to the Stranger (Quasar - Cosmos in Collision)

The ability to utilize psionic powers in combination with physical combat. Technique of Omni-Psionics. Variation of Combat Merging. Not to be confused with Psychological Combat.

The user can infuse their psionic powers with physical combat. 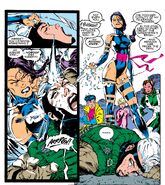 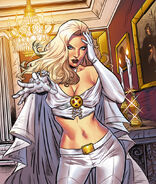 Grifter (Image/DC/Wildstorm Comics)
Add a photo to this gallery

Mob vs Tatsumaki (Mob Psycho vs One Punch Man) - One Minute Melee S5 EP8
Add a photo to this gallery
Retrieved from "https://powerlisting.fandom.com/wiki/Psionic_Combat?oldid=1531363"
Community content is available under CC-BY-SA unless otherwise noted.