Cancel psionic powers/abilities.
The power to nullify the psionic powers of others. Sub-power of Anti-Psychic Presence. Variation of Power Negation. Opposite to Psionic Augmentation.

The user can negate superhuman powers and effects that originate from psionics. In addition, psionic objects/items and potions are rendered useless. Psionic creations even weaken, and eventually crumble, disperse or dissolve in the user's presence. 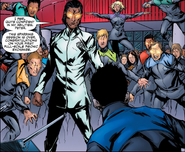 Hidden Moon (Valiant Entertainment) can dampen and nullify psiot powers.
Add a photo to this gallery
Retrieved from "https://powerlisting.fandom.com/wiki/Psionic_Negation?oldid=1568320"
Community content is available under CC-BY-SA unless otherwise noted.