Liara T'Soni (Mass Effect) can enhance her projectile attacks with the use of "warp ammo."

The ability to cast psychic abilities by using ranged weapons as conduits. Variation of Power Artillery and Psychic Weaponry.

The user can either use various ranged weaponry such as slingshots, bows, guns, cannons etc, as a conduit for psionic powers or impose those effects on ranged weapons to enhance them.

Sirens such as Lilith and Maya (Borderlands) can channel their psionic powers to enhance their guns. 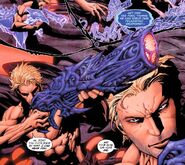 Daemonites (DC Comics/Wildstorm) utilize weaponry that has no physical trigger, but is activated telepathically.

Psylocke (Marvel Comics) can use her psionic constructs to create a bow...

...or a crossbow.
Add a photo to this gallery
Retrieved from "https://powerlisting.fandom.com/wiki/Psychic_Artillery?oldid=1514255"
Community content is available under CC-BY-SA unless otherwise noted.