Thanks to Dr. Strange, Peter Parker/Spider-Man (Marvel Comics) developed a special blindspot that prevents people from deducing his secret identity unless he is unmasked in front of them.

Project a psychic blindspot in regards to certain information.

The power to possess a psychic blindspot in regards to certain information.

The user possesses or is able to project a "psychic blindspot" to protect certain information. When confronted with any evidence which could lead to said information being uncovered, those affected will be unable to "connect the dots", or they will come to the wrong conclusion, but will accept it as the right one.

In some cases, the blindspot will outright erase the user's memory of the information in question once they depart.

Glory (Buffy the Vampire Slayer) possesses a mystical shroud that prevented humans from discovering that Ben was her human host, even if she changed form in front of them. 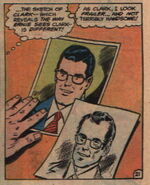 Clark Kent/Superman (DC Comics) Pre-Crisis could alter the way he was perceived by others via his hypnotic vision, preventing others from discovering that he and Clark Kent were the same person.

The Laughing Man (Ghost in The Shell) can prevent his identity from being discovered unless he allows it.

Punisher 2099 (Marvel Comics) possesses "face scrambler" circuitry that conceals his identity on digital cameras.
Add a photo to this gallery
Retrieved from "https://powerlisting.fandom.com/wiki/Psychic_Blindspot?oldid=1529048"
Community content is available under CC-BY-SA unless otherwise noted.