"Our will creates a wall to block your progress. Come and meet us on the bridge of the Von Braun. Let us discuss your future."
― Anatoly Korenchkin to SOLDIER-G65434-2, whilst blocking him off from the Umbilical entrance. (System Shock 2)

The power to generate force-fields of psychic energy. Sub-power of Psychic Energy Manipulation and Psychic Constructs. Variation of Shield Construction.

The user can create force-fields of psychic energy, either around themselves or to a wide radius around an area.

Lucy (Elfen Lied) using her vectors as shields to protect herself from bullets.

Psychic-type Pokémon such as Mewtwo (Pokémon) can use the Psychic-type move Barrier to protect themselves from damage. 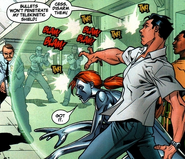 Hellion (Marvel Comics) can create shields and barriers out of psionic energy.

Silver the Hedgehog (Sonic the Hedgehog series) can use his psychokinesis to create barriers of psychic energy.
Add a photo to this gallery
Retrieved from "https://powerlisting.fandom.com/wiki/Psychic_Force-Field_Generation?oldid=1432104"
Community content is available under CC-BY-SA unless otherwise noted.