Thanks to his helmet, the Juggernaut (Marvel Comics) is completely impervious to any psychic phenomena, shrugging off even attempts from the likes of Charles Xavier.

Be completely immune to any psychic force.

"To be free is to have freedom of thought."
― Old Man (Fate/Apocrypha)

"Ms. Frost...No Man or Woman shall enter the Mind of Victor Von Doom. I Suggest you Stop Attempting To Do So or Incur My Wrath."
― Victor Von Doom to Emma Frost (Secret Invasion: Dark Reign)

The user is completely immune to any/all psychic phenomena regardless of its nature and origin (natural, supernatural, magical, technological, etc.). Their mind cannot be controlled, damaged, read, influenced, emulated, altered, detected or communicated with, forcing users with telepathic allies to rely on alternate means of long-distance communication, usually via technological or magical devices.

Simply put, the users' mind cannot be entered or affected in any way, making them perfectly immune to any mind-related effects and abilities.

Bella Cullen (Twilight Saga) possesses an impenetrable psychic shield she can expand to protect allies, made even more fearsome by the telepathic nature of vampires' unique abilities.

Due to his lack of Delta Brain Wave, Philip J. Fry I (Futurama) is immune to all kinds of psychic influence.

Emma Frost (Marvel Comics) is completely immune to forms of mental attacks thanks to her Diamond Form.

Max Eisenhardt/Magneto (Marvel Comics) is immune to any psychic phenomena, even from powerful telepaths as powerful as Charles Xavier, as long as he is wearing his helmet. 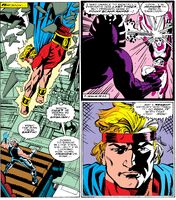