The power to track people/objects with one’s mind and/or create mental maps of an area. Sub-power of Clairvoyance, Telepathy, and Empathy.

The user can trace where targeted objects/subjects are located, but can’t identify a specific locale unless they are highly experienced or in short range. Can tell if target is progressing. They have psychic compass within them, feeling a magnetic pull towards the direction to the target.

Another version is that the user can create a mental map of an area to prevent getting lost or quickly reach the exit.

Buffy Summers (Buffy the Vampire Slayer) possesses a heightened awareness of her surroundings, allowing her to navigate and fight instinctively.

Kakistos (Buffy the Vampire Slayer) can sense and track anyone and anything that bears his mark.

At various times in his life, Peter Parker/Spider-Man's (Marvel Comics) Spider-Sense expands into a psychological awareness of his surroundings... 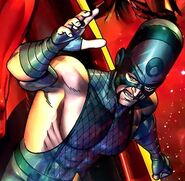 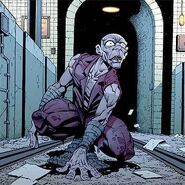 At its peek The Mind Gem (Marvel Comics) can access all minds in existence simultaneously, which would allow users of it to mentaly track down anyone. 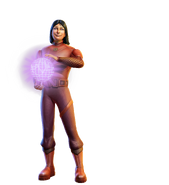 Hadya the Guide (The 99). Her brain works like a GPS system and a powerful telephoto satellite.

As a human/Kraang mutant, April O'Neil (Teenage Mutant Ninja Turtles 2012 series) can use her telepathy to track down others.
Add a photo to this gallery
Retrieved from "https://powerlisting.fandom.com/wiki/Psychic_Navigation?oldid=1547529"
Community content is available under CC-BY-SA unless otherwise noted.