The user can create, shape and manipulate psychic vibrations/vibratory energy, allowing them to alter the rhythm of a target’s consciousness and disrupt of their train of thought. 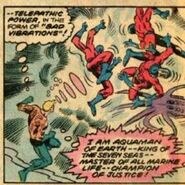 Aquaman (DC Comics) can focus his oceanic telepathy into a psychic shockwave that has tangible concussive effect.
Add a photo to this gallery
Retrieved from "https://powerlisting.fandom.com/wiki/Psychic_Vibration_Manipulation?oldid=1391419"
Community content is available under CC-BY-SA unless otherwise noted.