Possess an innate understanding of psychology.

"I've never once thought of you as an ally. Not you. Not Kushida. Not Hirata. All people are nothing but tools. It doesn't matter how its done. It doesn't matter what needs to be sacrificed. In this world, winning is everything. As long as I win in the end...That's all that matters."
― Kiyotaka Ayanokouji (Classroom of the Elite)

"Shall I tell you something shocking? The god that you guys worshiped Ehit and the god the demons were worshiping is actually one and the same god. In other words, all of you have been the worshiping the same evil bastard who is telling you to fight and kill each other without ever realizing it!"
― Hajime Nagumo to Liliana S. B. Heiligh about Ehit (Arifureta Sekai Saikyou)

"What's the line? "Saving people, Hunting things...the Family business." Well, I think the people you save, they're how you justify your pathetic little lives. The alcoholism, the collateral damage, the pain you've caused! The one thing that allows you to sleep at night, the one thing is knowing that these folks are out there, still out there happy and healthy because of you...You great, big, bloody heroes."
― Crowley to Sam and Dean Winchester (Supernatural: S8E22 Clip Show)

"To the cowards quaking behind the police department's walls: You will not be spared. And to Batman: I have already won. Emptied your city with a vial of toxin and a few threatening words. That's how little the safety you provided was worth. And when the dawn comes...when Gotham lies in ruins and I turn my gaze to the world beyond...the legend of the Batman will be worth nothing at all.""
― Scarecrow (Arkham Knight)

"Those who are too smart will hurt themselves; those who delve too deeply will reach foolishness; those who criticise others do not know their own faults"
― Lao Zi, Founder of Taoism

The user possesses an incredible and innate understanding/knowledge of psychology and can use it for various purposes, often by changing the perception or behavior of others through underhanded, deceptive, or even abusive tactics. Users also have an intuitive mastery of the associated speech and body language, expertly sending all the right signals. Granting the user major leverage in any social situation and allowing them to easily wrap anyone around their little finger in a matter of moments and easily forging a potentially fanatical level of trust and devotion in whoever they exert these talents on.

Using this ability, the user can develop an incredibly charismatic personality and is capable of causing sudden and profound changes to the psychological state of others very quickly and easily. With enough time the user could change anyone's views on anything.

Sosuke Aizen (Bleach) is a brilliant master manipulator, he deceived Soul Society and manipulated the entire Gotei 13 with his mind games.

Spectra (Danny Phantom) once posed as Casper High's School counselor, using this to make others feel miserable by using their future, looks, and confidence.

Bruce Wayne/Batman (DC Comics) is a master at understanding the scarred psyche of his adversaries.

Hugo Strange (DC Comics) is a formidable enemy of Batman's, who is privy to the dark knight's secret identity...

...instantly analyzing himself and Catwoman.

Usobuki Tadashi (Funouhan) is very skilled at manipulating others psychologically, even killing them by making them believe they have been poisoned or a variety of other beliefs without even touching them. 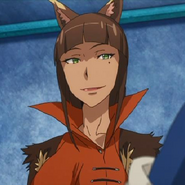 Norra, The Pied Piper (Gate) is a notorious assassin that can psychologically manipulate everyone from benevolent elder people to innocent children into heartless killers to do her bidding.

Naraku (InuYasha) was shown to be a master at manipulating both demons and humans alike. Throughout his life, he manipulated many people and demons to get what he wanted without getting his own hands dirty.

Nate Ford's (Leverage) years as an insurance fraud investigator gives him an understanding of how his targets will react to certain situations.

Karnak (Marvel Comics) of the Inhumans can find the faults of anything, and deduce the various aspects of another person psychology, finding the faults to their personalities to better gain leverage over his opponents.

Sakazuki/Akainu (One Piece) is an excellent manipulator, using Squard and Ace's loyalty to Whitebeard to his advantage and successfully killing the latter by doing so.

Donquixote Doflamingo (One Piece) is a master in the art of psychological warfare, deceiving and manipulating the entire citizenry of Dressrossa for ten years and while using the Birdcage, he turned the majority of the citizens and criminals against each other using fear and greed.

SCP-035 - Possessive Mask (SCP Foundation) has an impressive understanding of how the brain works, and can manually imitate others behaviors and personalities.

While Dr. Hannibal Lecter (Silents of the Limb/Hannibal) is clearly psychotic, he's fully aware of this and is still a genius in psychotherapy.

Neyla (Sly Cooper series) could perform a high level of psychological warfare; she could charm anyone before betraying them, as she betrayed the Cooper Gang, Interpol, and the Klaww Gang.

Eri Nakamura (Arifureta Sekai Saikyou) is a genius manipulator, able to perfectly deceive and manipulate her classmates into a death trap including the sharp-minded Shizuku.

Ehit (Arifureta Sekai Saikyou) is an extremely crafty and manipulative Evil God who has manipulated the people of Tortus into fighting millennia of brutal wars for his twisted entertainment...

...even defeated his archenemies the Liberators by cleverly manipulating his victims to turn against them.

Nagumo Hajime (Arifureta Sekai Saikyou) proved himself to be a more cunning manipulator than the Evil God Ehit, being to deceive the Humans of Tortus Ehit's own pawns to turn against him.

Malty S Melromarc (Rising of the Shield Hero) has always had a talent for manipulating others into believing her, usually by taking advantage of mental weaknesses or when they're at their lowest.

Nagato (Naruto Shippuden)
Add a photo to this gallery

Key & Peele - School Bully
One school bully is surprisingly in touch with his emotions.

WATCHMEN
Add a photo to this gallery
Retrieved from "https://powerlisting.fandom.com/wiki/Psychological_Intuition?oldid=1691577"
Community content is available under CC-BY-SA unless otherwise noted.