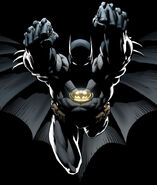 The half demon Naraku (InuYasha) was shown to be a master at manipulating demons and humans alike. Throughout the series, he manipulated many people and demons to get what he wanted without getting his own hands dirty.
Add a photo to this gallery
Retrieved from "https://powerlisting.fandom.com/wiki/Psychological_Intuition?oldid=718234"
Community content is available under CC-BY-SA unless otherwise noted.