Use the traits of pukwudjies.

The power to use the abilities of pukwudgies. Variation of Fairy Physiology.

User with this ability either is or can transform into a pukwudgie (also Puk-Wudjie, Puck-wudj-ininee, lilt. "little wild man of the woods that vanishes"), a creature found in Delaware and Wampanoag folklore, said to be 4-to-5-foot-tall (120 to 150 cm). According to legend, Pukwudgies can appear and disappear at will, lure people to their deaths, use magic, launch poison arrows, and create fire.

Native Americans believed that Pukwudgies were once friendly to humans, but then turned against them, and are best left alone. According to lore, a person who annoyed a Pukwudgie would be subject to nasty tricks by it, or subject to being followed by the Pukwudgie, who would cause trouble for them. They are known to kidnap people, push them off cliffs, attack their victims with short knives and spears, and to use sand to blind their victims. 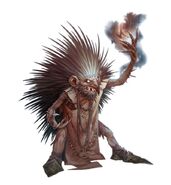 Puckwidgies (My Little Pony: Friendship is Magic)
Add a photo to this gallery
Retrieved from "https://powerlisting.fandom.com/wiki/Pukwudgie_Physiology?oldid=1317868"
Community content is available under CC-BY-SA unless otherwise noted.