When Jacen Solo (Star Wars Expanded Universe) achieved 'Oneness' with the Force by combining the Light and Dark Sides in a pure state of perfect Balance, he gained absolutely limitless power.

Gain a form based on a pure state of being.

"Because in the end, aren't all religions the same? They tell us what to eat, when to pray, that this lump of clay called Man can somehow shape himself to resemble the divine. But we can never attain that perfect grace if we have hatred in our hearts."
― Homer Simpson (The Simpsons)

The power to go into a form/mode made from a pure state of being. Sub-power of Spiritual Perfection. Variation of Freedom and Zenith Form. Not to be confused with Light Form.

The user is able to enter an extremely powerful form in which they reach a pure state of being; this form is the root of their compete purity in being as they are no longer any hindrances to oneself and their power is complete and total, acquiring a clear mind, body and soul which is absent of the flaws or weaknesses they once had.

With this form their bodies manifest as a paragon version of their kind and self in being, free from any taint they would’ve had, completing themselves as purified warped being of incredible power improving themselves to the apex of their potential, while having a radiant appearance that reflects the purity of their form.

Unlike light and dark forms, pure forms can be either light or dark, good or evil or even both at the same time. Pure states can also be considered an advanced/higher form for any/all of the various modes or forms.

Kid Buu (Dragon Ball Z) is a Pure Majin, the form Majin Buu takes when all of his absorptions have been ripped out of his body by Goku and Vegeta.

After defeating his dark knight side by acceptance rather then violence, Cecil Harvey (Final Fantasy IV) was granted the pure form and power of a Paladin.

After finally completing the trial of Mt Ordeals, Kain Highwind (Final Fantasy IV) was granted the status of a Holy Dragoon Knight. 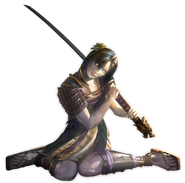 After finding her father's katana, Hisako (Killer Instinct 2013) was purified of her rage and hatred and became a kami spirit, Shin Hisako.

After reuniting with his brother and putting aside the guilt he felt in the past, Quon (Towa no Quon) was able to gain his Complete Form, a godlike mode/state of pure astral energy.

When Ryu (Breath of Fire II) uses the power of Anfini he enters into a state of spiritual perfection and gains a connection to everything and everyone, allowing him to purge himself of the doubts, flaws and hindrances he had before and grants him the strength to defeat Deathevan.
Community content is available under CC-BY-SA unless otherwise noted.
Advertisement