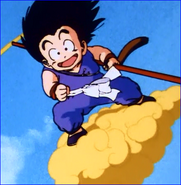 Due to his pure heart, Son Goku (Dragon Ball series) can ride the Flying Nimbus...

Monkey D. Luffy (One Piece) is the first man in the entire world who can easily ignore Boa Hancock's seductions because of his pure heart and simple nature.

Peter Paker/Spider-Man (Marvel Comics) is one of the world's most morally obligated superhero who has dedicated his entire life to writing any wrongs.
Add a photo to this gallery
Retrieved from "https://powerlisting.fandom.com/wiki/Pure_Heart?oldid=1127250"
Community content is available under CC-BY-SA unless otherwise noted.