The ability to use purification-based abilities by using ranged weapons as conduits. Variation of Power Artillery. Opposite to Corruption Artillery. 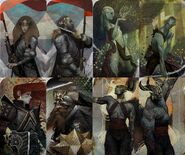 The Inquisitor (Dragon Age: Inquisition)
Add a photo to this gallery
Retrieved from "https://powerlisting.fandom.com/wiki/Purification_Artillery?oldid=1492765"
Community content is available under CC-BY-SA unless otherwise noted.