The power to release/use purification/purifying energies for various attacks. Sub-power of Purification Manipulation. Variation of Attack Powers. Opposite to Corruption Attacks. Not to be confused with Divine Attacks or Benefic Attacks.

User can release/use purification/purifying energies for attacks of various shapes and/or intensities, either projected, used as a part of melee attacks, etc. 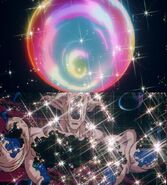