User is able to create beings of fire or shape existing flames into wanted shapes and purposes. They can grant the beings varying levels of independence (controlled, automatons/programmed, semi-independent) and existence (momentary to permanent) and delete the creature once they are done with them.

Shiki (Black Cat) creating the Scorching Serpent, a flaming draconic snake that costs quite a bit of ki, but can incinerates anything.

Garudamon (Digimon) using his Wing Blade attack to launch a powerful blast of fire as a bird.

Invoker (Dota 2) can mix fire and ice magic to create fire spirits to aid him in battle.

Vincent Crabbe (Harry Potter) using Fiendfyre, cursed flames that come to life in the form of magical creatures, though his lack of mastery caused them to turn on him. 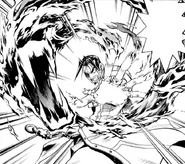 Hiei (Yu Yu Hakusho) using the flames of the underworld to create the Dragon of the Darkness Flame.

Ryu Hayabusa (Ninja Gaiden) used the Art of True Inferno to create a blazing dragon.
Slashvol2p213.png
Suzaku Himejima (Slash Dog) creating a bird of spiritual fire that can incinerate monsters to ashes.
Add a photo to this gallery
Retrieved from "https://powerlisting.fandom.com/wiki/Pyrokinetic_Creature_Creation?oldid=1343103"
Community content is available under CC-BY-SA unless otherwise noted.