Johnny Storm/Human Torch (Marvel Comics) can surf on the flames that he generates.

The ability to manipulate fire to increase their maneuverability. Sub-power of Fire Manipulation. Variation of Matter Surfing and Ergokinetic Surfing.

User controls the fire in a way that increases their ability to move and/or maneuver either by granting them abilities they otherwise lack or allowing them to ignore normally needed equipment. 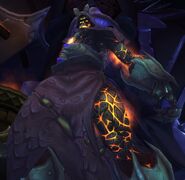 Ignacious (Warcraft) can use "Inferno Rush" to move from one place to another while leaving a trail of fire behind.
Add a photo to this gallery
Retrieved from "https://powerlisting.fandom.com/wiki/Pyrokinetic_Surfing?oldid=1519912"
Community content is available under CC-BY-SA unless otherwise noted.