Use the traits of Qilin.

The ability to use the abilities of Qilin. Variation of Mythical Bestiary.

The user is or has the ability to take on the form of Qilin: a mythical hooved Chinese chimerical creature known throughout various East Asian cultures, and is said to appear with the imminent arrival or passing of a wise sage or an illustrious ruler. It is a good omen that brings rui; roughly translated as "serenity" or "prosperity" and often depicted with what looks like fire all over its body. It is sometimes misleadingly called the "Chinese unicorn" due to conflation with the unicorn by Westerners.

There are many different ways Qilin have been described. Some think of them as a rare form of unicorn; others have described it as a creature that has the head of a dragon and a body of tiger with scales. Others see it as a creature with a single horn on its forehead, a multicolored back, the hooves of a horse, the body of a deer, and with the tail of an ox.

Although it looks fearsome, the Qilin only punishes the wicked. It can walk on grass yet not trample the blades, and it can also walk on water. As it is a peaceful creature, its diet does not include flesh. It takes great care when it walks never to harm or tread on any living thing, and it is said to appear only in areas ruled by a wise and benevolent leader (some say even if this area is only a house). It is normally gentle but can become fierce if a pure person is threatened by a sinner, spouting flames from its mouth and exercising other fearsome powers that vary from story to story.

There are variations in the appearance of the qilin, even in historical China, owing to cultural differences between dynasties and regions. 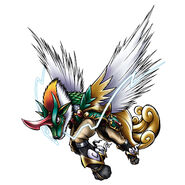 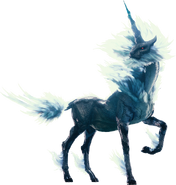 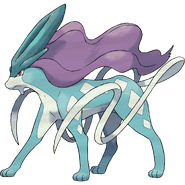 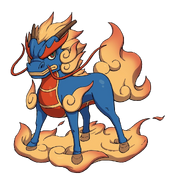 The Kirin (Twelve Kingdoms) such as Keiki that is bound to and chooses the ruler of each kingdom.

Enki (Twelve Kingdoms), as the Kirin. 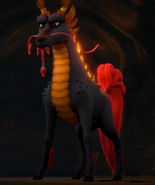 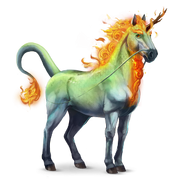 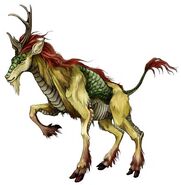