Janenba (Dragon Ball Z: Fusion Reborn) using his "Disassembly Teleport" to shift his own body through the fabrics of reality.

The user can disassemble the atomic structure down to its most basic components, protons and neutrons, slipping into the quantum field, and then reconstruct them at a different spatial location. Because subatomic particles slip beneath reality at a quantum level, they can travel through dimensions, allowing time travel.

Aoi Nogami (Absolutely Lovely Children) can teleport at a quantum level, allowing her to achieve her "Quantum Cutter" technique, earning her the nickname "Lightspeed Goddess".

Setsuna Itami (Coppelion) can shift and replace matter due to her Dark Matter related ability, which is compared to being similar to Meisa Ichikawa's "Particle Break" ability.

Captain Atom (DC Comics) is tied to the Quantum Field, allowing him to jump through time/space if he concentrates or absorbs too much energy. 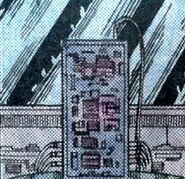 The Stealthray (DC Comics) is a prototype teleportation device that rides along a quantum energy stream for mass transport.

Quantum (Marvel Comics) using "Quantumization" to quantumize his spatial coordinates, meaning that he is in different positions within his own probability field, replicating the quantum theory on a macroscopic level.

Dr. Manhattan (Watchmen) can teleport and travel at a quantum level due to the removal of his intrinsic field, allowing him to manipulate own body at a subatomic level.
Add a photo to this gallery
Retrieved from "https://powerlisting.fandom.com/wiki/Quantum_Teleportation?oldid=1445328"
Community content is available under CC-BY-SA unless otherwise noted.