User can create quasars (quasi-stellar radio sources), energetic and distant members of a class of objects called active galactic nuclei. They are amongst the largest single objects in the known universe. Quasars are luminous and were first identified as being high redshift sources of electromagnetic energy, including radio waves and visible light, and appeared to be similar to stars, rather than extended sources similar to galaxies. Their luminosity can be 100 times greater than that of the Milky Way.

Most quasars were formed approximately 12 billion years ago, and they are normally caused by collisions of galaxies, with the galaxies' central black holes merging to form either a supermassive black hole or a binary black hole system. 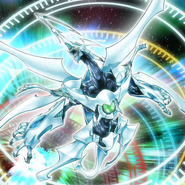 Shooting Quasar Dragon, as its name suggests (Yu-Gi-Oh 5Ds) is the living cosmic embodiment of a quasar.
Community content is available under CC-BY-SA unless otherwise noted.