The power to generate limitless amounts of energy from one's own body. Ultimate form of Energy Generation.

User can generate their own energy instead of always depending on the energy around them. The energy produced can be utilized for a number of uses such as enhancing their own physical or mental attributes to the superhuman level or above. 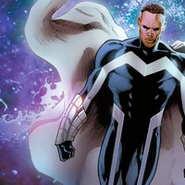 Captain Atom (DC Comics)
Add a photo to this gallery
Retrieved from "https://powerlisting.fandom.com/wiki/Quintessence_Force?oldid=1688641"
Community content is available under CC-BY-SA unless otherwise noted.