The Incredible Hulk (Marvel Comics) is an exceptional Gamma Mutate, with the ability to be empowered by both gamma and cosmic radiation

Gain strength from the radiation.

The power to gain strength from radiation. Technique of Radiation Manipulation. Variation of Affinity and Universal Force Empowerment.

Users become stronger, faster, more durable, etc. from radiation, possibly unlocking abilities related to the affinity and enhancing the existing powers. Some users may be able draw sustenance from the elements or even slow or stop aging. 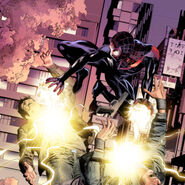 Due to be bitten by a different radioactive spider compared to Peter Parker, Miles Morales/Spider-Man (Marvel Comics) has slightly different Spider-based powers such as a paralyzing touch. but his Spider-Sense is not as advanced.

Matt Murdock/Daredevil (Marvel Comics) originally gained his powers from exposure to radiation through a radioactive isotope that landed on his eyes.

Due to the presence of Quantonium - powerful alien radioactive energy - in her body, Susan Murphy (Monsters vs. Aliens) has grown in both strength and size, and eventually is able to control her size at will.

Conduits (inFamous) are not only immune to the negative effects of ray-field radiation, but larger concentrations of it can enhance and even activate conduit abilities.
Add a photo to this gallery
Retrieved from "https://powerlisting.fandom.com/wiki/Radiation_Empowerment?oldid=1355460"
Community content is available under CC-BY-SA unless otherwise noted.