The ability to wield or create weapons using radiation or radioactive materials. Variation of Power Weaponry.

Alex Danvers (Arrowverse/Supergirl) occasionally utilizes Kryptonite armaments, such as a body armor that enhances her physical abilities with an incorporated cannon of kryptonite radiation, and a sword with a kryptonite blade.

Green Arrow (DC Comics) has been known to use Kryptonite arrows on occasion. 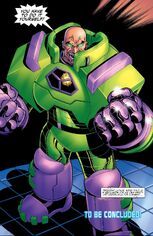 Lex Luthor (DC Comics) regularly makes use of a wide variety of kryptonite-based weapons in his battles against Superman and other Kryptonians.

The Kryptonite spear (DC Extended Universe) used by Batman in an attempt to kill Superman.

Rhea (Arrowverse/Supergirl)
Add a photo to this gallery
Retrieved from "https://powerlisting.fandom.com/wiki/Radiation_Weaponry?oldid=1519376"
Community content is available under CC-BY-SA unless otherwise noted.