Titano (DC) fires beams of Kryptonite radiation from his eyes

Generate beams of radiation from eyes

The power to generate beams of radiation from the eyes. Variation of of Optic Blasts.

The user is capable of projecting beams of different kinds of radiation from the eyes.

NRG (Ben 10) firing an atomic blast through his visor.

Leander (Ben 10) firing a nuclear blast through his visor.

Plankton (SpongeBob SquarePants) firing his radioactive vision at the Bikini Bottom.
Add a photo to this gallery 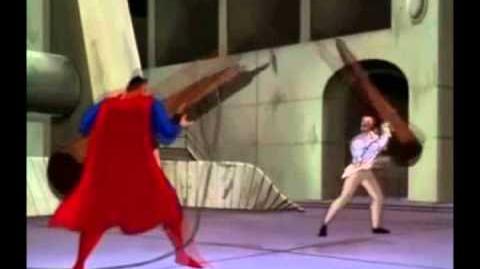 Superman Vs. Metallo (Heavy Metal)
Metallo fires his kryptonite radioactive vision at Superman (1:55 / 2:09)
Add a photo to this gallery
Retrieved from "https://powerlisting.fandom.com/wiki/Radioactive_Vision?oldid=562240"
Community content is available under CC-BY-SA unless otherwise noted.