The power to manipulate rainbows. Variation of Optical Phenomena Manipulation.

The user can create, shape and manipulate rainbows, an optical and meteorological phenomenon that is caused by both reflection and refraction of light in water droplets in the Earth's atmosphere, resulting in a spectrum of light appearing in the sky in the form of a multicolored arc. 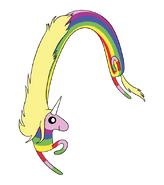 After unlocking the Chest of Harmony, the Mane Six (My Little Pony Series) became gifted with the magic of the mysterious Rainbow Power.

Being a ghost, Miles Preston (The Haunted Hathaways) is able to use his shapeshifting to not only turn into people or animals, but rainbows.

Seven (Numberblocks) can create rainbows from his colorful rainbow body.

Like Seven, Seventy (Numberblocks) also creates rainbows and can create a giant rainbow arc by splitting into ten sevens. 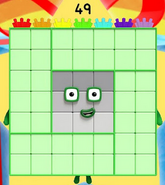 Forty-Nine (Numberblocks) is a square Numberblock of 7x7...

...who creates square shaped rainbows after she jumps to the skies.
Português do Brasil
Community content is available under CC-BY-SA unless otherwise noted.
Advertisement