The Pathway to Grimgar (Grimgar of Fantasy and Ash) is a tunnel that branches off countless times, and each passageway can lead literally anywhere including other worlds, times, dimensions, universes and even to the personal domains of various gods.

"You try walking a straight line without bumping into wave functions of neighboring realities!"
"We do it all the time. It's called not being so stupid it warps the universe!"
― Black Belt and Black Mage (8-Bit Theater)

"At the fork in the road, follow the rocky path. It will take you to the dragons lair!"
"Where will the other one take me?"
"Space Ace!"
― The Scissorsmith and Jack referencing Don Bluth games (Samurai Jack)

The power to create crossroads/pathways to any reality/place in existence. Advanced form of Planeswalking. Variation of Dimensional Travel. Not to be confused with Meta Teleportation.

User can create/open pathways to anywhere/everywhere, including other afterlife's, worlds, realms, realities, dreams, planes, dimensions, universes, times, domains, etc. linking those places with the world the user calls it from. Pathways created by this are a easily usable for others besides the user, and may either be permanent or temporary by choice depending on the users skill and the place in question. 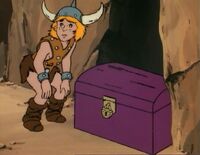 Depending on where it is when its opened, Zandora's Box (Dungeons & Dragons: The Animated Series) can generate pathways that lead absolutely anywhere, including other times, dimensions, planes, domains, realities and even outside of existence entirely.

The Sea of Doors (Bioshock Infinite) is a realm represented by Lighthouses that connects to any reality or time in existence.

The Nexus (Star Trek) is an extra-dimensional realm in which one's thoughts and desires shaped reality. Inside the Nexus, time and space had no meaning, allowing one to visit any time and any place that one could imagine. 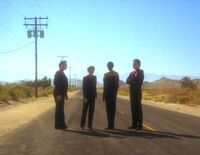 The Q Continuum (Star Trek) is an extra-dimensional plane of existence inhabited by a race of beings known as the Q. The term could also refer to the Q society itself.

The Infinite Staircase (Planescape)
Add a photo to this gallery