Arata Kasuga's (Trinity Seven) breakdown phenomenon can expel anyone from reality and erase their connection to it, leaving them trapped in a void outside of time and space.

User can expel anything or anyone from reality, allowing them to erase/remove a targets connection to it which can either erase them from reality, possibly leading to a state of Nonexistence or separate them from it, leaving them trapped in a void outside reality. 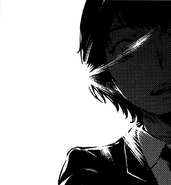 Kamisato Kakeru (Toaru Majutsu no Index) "exiled" the magic gods from there current reality into another, 'unused' reality.
Add a photo to this gallery
Retrieved from "https://powerlisting.fandom.com/wiki/Reality_Expulsion?oldid=1206676"
Community content is available under CC-BY-SA unless otherwise noted.