Leonard Watch (Kekkai Sensen) was given the All-Seeing Eyes of God which allow him to perceive the world's "Truth" among other abilities.

The power to perceive reality and truth. Sub-power of Omni-Perception and Reality Warping.

The user can perceive reality, allowing them to sense and comprehend the whole truth, facts and mechanics behind anything no matter how it is hidden or how complex it is. They will automatically know if they are lied to and sense the truth.

They are immune to illusions caused by users of Telepathy, Mental Manipulation, and Illusion Manipulation, even if the users of those themselves are not in the area (as in another building). The power can also be used to produce answers to questions that the user perceives, the user automatically knows the solution to any problem they perceive.

Adam (Buffy the Vampire Slayer) can perceive reality alterations, such as Jonathan Levinson's spell to make himself a paragon. 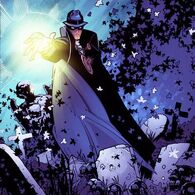