Thanatos (Saint Seiya) can transform a simple game of chess into reality.

The power to transform games into reality. Variation of Reality Warping. Advanced form of Game Interaction.

The user can transform normal games into reality, using them to fight, enhance the user's probability, remove boundaries, make any rule of the game real, and adapt laws.

...while his Bankai Katen Kyōkotsu: Karamatsu Shinjū, forces everyone within its range of effect to play along in a tragic stage play about a double suicide.

Discord (My Little Pony series) had transformed Ogres and Oubliettes into reality in two different ways with Chaos Magic. 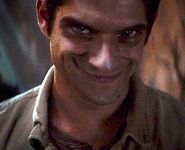 Calux (Truth or Dare 2018) is an evil and sadistic demon who turns games into reality, turning games such as Hide and Seek or Truth or Dare into dangerousgames that'll continue until all the players are dead or he's sealed once again.
Add a photo to this gallery
Retrieved from "https://powerlisting.fandom.com/wiki/Reality_Playing?oldid=1665769"
Community content is available under CC-BY-SA unless otherwise noted.