Proteus (Marvel Comics) is constantly warping reality around him at random because of his lack of focus.

Cause reality to randomly change.

The power to cause reality to change randomly and spontaneously. Variation of Reality Warping.

The user can cause the fabric of reality to be altered randomly. this can manifest in a variety of ways, such as: creating various things, such as life or bombs, or causing Destruction to anything around them, heal or kill, or even bestow random powers on themselves or others. Any effect can be reached, only that it will be always random. Like Reality Warping, it can be at a small, cosmic level or even universal level. 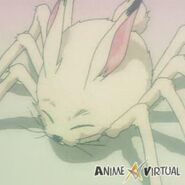 Due to their connection to Yggdrasil, System Bugs (Ah! My Goddess) can cause spontaeous and unnatural warps of reality until their debugged.

Unown (Pokémon), when in large numbers, can start to affect reality in unpredictable ways.
Community content is available under CC-BY-SA unless otherwise noted.
Advertisement