"You take the blue pill, the story ends, you wake up in bed and believe whatever you want to believe. You take the red pill, you stay in Wonderland. And I show you how deep the Rabbit hole goes."
― Morpheus to Tomas A. Anderson, offering means to stay in the fake reality or to enter the true reality.

The power to achieve supernatural feats by rejecting aspects of reality. Sub-power of Nonexistence.

The user can achieve supernatural feats by rejecting aspects of reality. They can become indestructible by denying physical damage, deny the laws of physics, and even become immortal by denying death/aging. 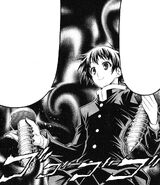 Misogi (Medaka Box)'s All Fiction allows him to reject reality itself, whether existence or death, though once gone, he cannot revert it.

Danzō (Naruto) uses Izanagi to rewrite fatal damage to a dream, rejecting reality itself.
Add a photo to this gallery
Retrieved from "https://powerlisting.fandom.com/wiki/Reality_Rejection?oldid=1528580"
Community content is available under CC-BY-SA unless otherwise noted.