Noel Vermillion (Blazblue) with the "Eye of the Azure", is able to choose which reality is the "default" timeline by observing it.

The ability to warp reality by selecting a possible reality/timeline and make it be the "true" reality. Variation of Meta Probability Manipulation.

User can completely rewrite reality and all it's contents simply by choosing one of the infinite potential worlds or timelines that are available and then make the one chosen be the single "true" reality. Reverting everything else back into mere "What if" scenarios.

The changes that could be made with this power are potentially endless in variety. Due to the fact that users are capable of altering anything in existence regardless of their target's size or composition. Whether they be defined or abstract, meager or grand, physical or mystical. As long as the probability isn't a complete zero, users are able to achieve all they desire.

To put it in simple terms. If there is a type of world that you wish for and it happens to be possible one way or another, then you are not only able to make it real, but also make it be the only world that is to ever truly be real in all of existence.

Izanami (Blazblue) with access to the Takamagahara System, is able to cause Phenomonal/Dimensional Interference greater than that of the "Eye of the Azure."

Hazama (Blazblue) is, or was a Observer, those whom assist in viewing all the possibilities of the world due to the Master Unit Amaterasu.

The Takamagahara System (Blazblue) is a program aimed with assessing the Boundary and capable of interference right below the Eye of the Azure and Master Unit Amaterasu. 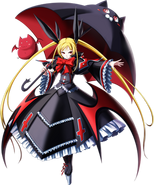 Rachel Alucard (Blazblue) is as with Hazama, a Observer.Currently she is observing Hakumen.

Kokonoe (Blazblue) is an Observer along with Rachel and Hazama, she is a former observer of Hakumen and currently observing Arakune.

With "The Almighty", Ywhach (Bleach) can not only see all possible futures, but freely choose which ones actually happen. 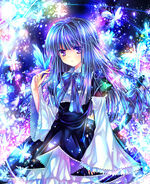 Lambdadelta (Umineko no Naku koro Ni) the Witch of Certainty.

This seems like Castelia City, except 100 years more advanced.

Why is it that 8/10 interpretations of the future sucks so much?

Something possible in the future? Maybe, also is that a planet crumbling in the background?

I think we just colonized Mars. 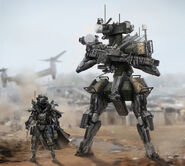 Welcome to EDN III where everything is trying to KILL YOU!

A city in the sky, how quaint.
Community content is available under CC-BY-SA unless otherwise noted.
Advertisement